The printed page has its limitations.  Chapter 7 of Golf in the Wild – Going Home tells the story of the Wrens of the Curragh – an outcast community of 19th-century Irish women who lived rough, brutally hard lives on the plains of Kildare. The name comes from the shelters they lived in, hollowed out “nests” in the ground which they covered with layers of furze. Their number included unmarried mothers, free-thinkers, alcoholics, prostitutes, vagrants, ex-convicts and harvest workers:

Edward Prince of Wales, as he was at the time, was reportedly introduced to the game in 1859 by his Governor, General Robert Bruce, an R&A member since 1834. Inspired by an exhibition match at Musselburgh, in 1861 his military association with the Grenadier Guards would take him to Curragh in Ireland where the recently opened golf course was immediately adjacent to the Camp. It is not documented if the future King found time for golf during his ten-week visit, but his extramural activities became infamous. A sexual novice, his fellow Guards arranged an introduction to Nellie Clifden, a local ‘actress’ and possibly a Wren of the Curragh who ‘knew her way round the Camp in the dark’. The resulting affair soon became public knowledge as the Guards’ tongues wagged and Nellie became known as the ‘Princess of Wales’. The scandal enraged his parents, Queen Victoria and her husband, Prince Albert, and steps were immediately taken to end the liaison. Prince Albert would die a few months later, a demise that Victoria blamed entirely on the anguish caused by Edward’s indiscretions – “I never can or shall look at him [Edward] without a shudder.” The older generation should never interfere with youthful passion – the ghosts of forbidden fruit can haunt an entire life. If anything is to be learned from this story, it is this – when tempted by sins of the flesh, play more golf.

The chapter heading quote is from Hunting the Wren by the Irish folk band Lankum – it first appeared on their album, The Live Long Day released on 25th October 2019. The ‘wren’ is a direct reference to the Wrens of the Curragh.

The wren is a small bird, how pretty she sings. She bested the eagle when she hid in its wings

It was this track and their anarchic appearance that inspired this section of the book – there is simply no substitute for seeing and hearing this remarkable performance:

… the ongoing and, seemingly endless task of getting the sequel in stock with booksellers and golf clubs.  To some extent, I have a head start compared to the first book.  I have contacts who have generously agreed to take the sequel without first seeing the book.  These good and helpful souls include:

The Gale Centre at Gairloch

and, needless to say, there is a generous supply at Allendale Golf Club – Neil, our secretary and greenkeeper will happily sell you a copy on request (he has the key to the store room where they are stored).

More outlets will be added soon – when they are, they will appear on the Purchase page.

Copies can also be ordered from Amazon if you think Jeff Bezos is short of a bob or two.

Pages for purchasing from Europe and the U.S. will soon be added to the purchase page.

It has been a long journey, but the sequel has now been printed and 1000 copies delivered to my door this morning!

To be accurate, they were delivered on a pallet at the bottom of the drive as the wagon couldn’t get any closer.  That was 42 boxes I had to shift, fortunately before it started raining.

Many thanks to those who have pre-ordered – I will get them in the post or hand deliver over the next week. 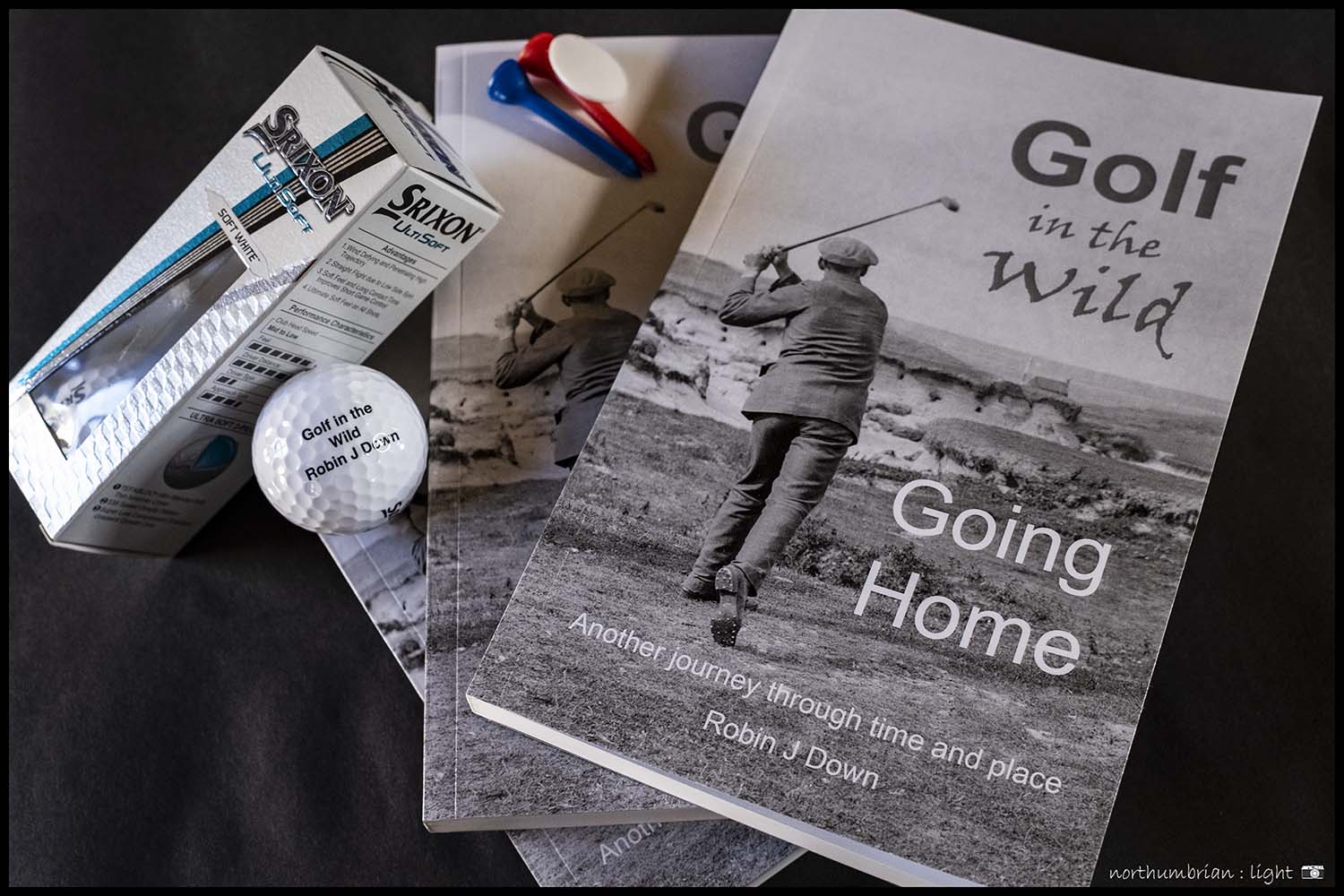 Apologies to those who have placed advance orders, but it looks like the sequel will not be available before Christmas.  The second page proofs are with me for final approval and the cover is being worked on, but to quote my publisher … I may well be able to get to print before Christmas but as for getting the book to you I do not know, last day for guaranteed delivery of books was 19th November, so to be honest, no it won’t be possible.  Hopefully, this should mean availability very early in the New Year.

… just a quick update to reassure, particularly those that have placed advance orders, progress is being made.  The editing process is complete and now the format and layout of individual pages is being finalised.  A draft cover design has been produced but this needs to be agreed with the publisher, Choir Press.  I am optimistic that the books will be printed by late November and I will endeavour to post out pre-orders in advance of Christmas.  Many thanks for your continuing patience – I trust it will be worth the wait. 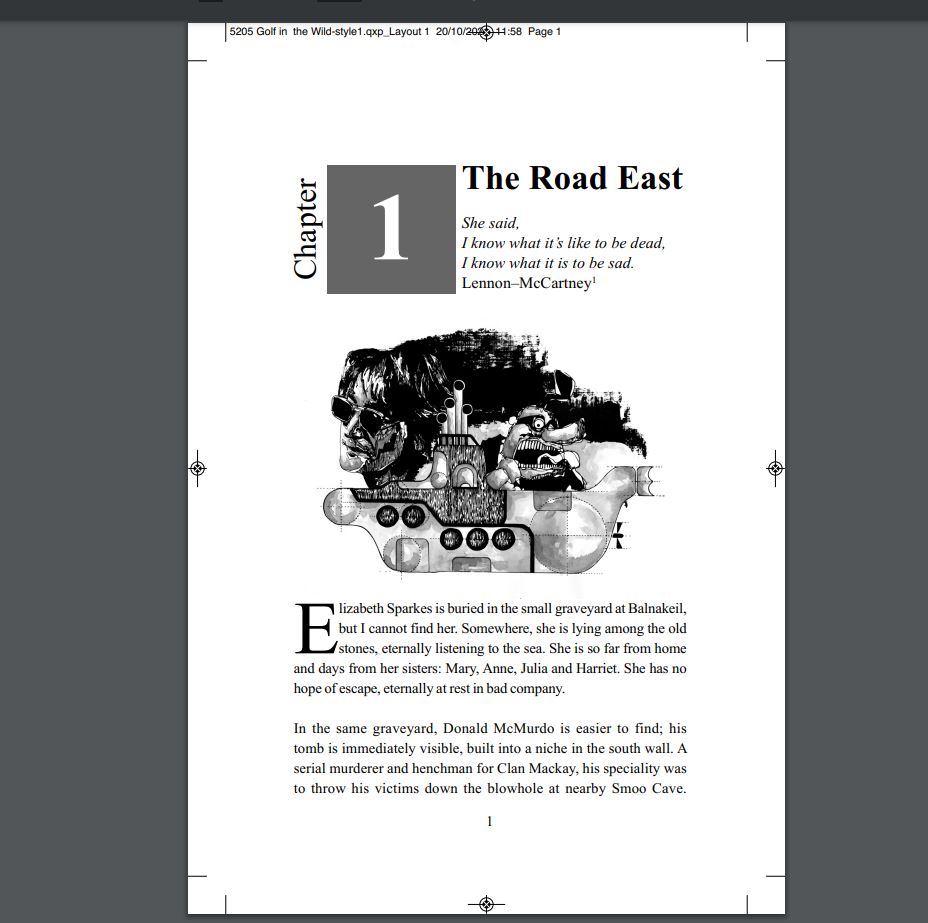 The 2021 Golf in the Wild Seniors Open at Allendale Golf Club is scheduled for Thursday 16th September.  The competition is an individual stableford, open to gents and ladies aged 55 and over.  It will be played off the white tees such that gents can experience the par-5 6th.  Tee times can be booked online through BRS – click here.  Gents maximum handicap is 28 and ladies 36.

Catering will be available from 08:30 – bacon rolls in the morning and light snacks throughout the day.  Subject to the number of entries, prize money will be a minimum of £100 for first place, £50 second and £25 third.  There will also be a £30 prize and additional trophy for the best gross.  This splendid trophy has been kindly donated by Tony Brown from Scarborough North – named the Spartylea Trophy, it reflects his affection for the area and golf in the wild at Allendale.

I had hoped to have the sequel, Golf in the Wild – Going Home, available to coincide with the event however, publication is now scheduled for end October.  The new book will be priced at £11.99 and but can be pre-ordered on the day at £10 – they will be signed and posted out f.o.c immediately following publication, together with any requested dedication.

Here’s hoping for the same excellent weather we had in 2020! 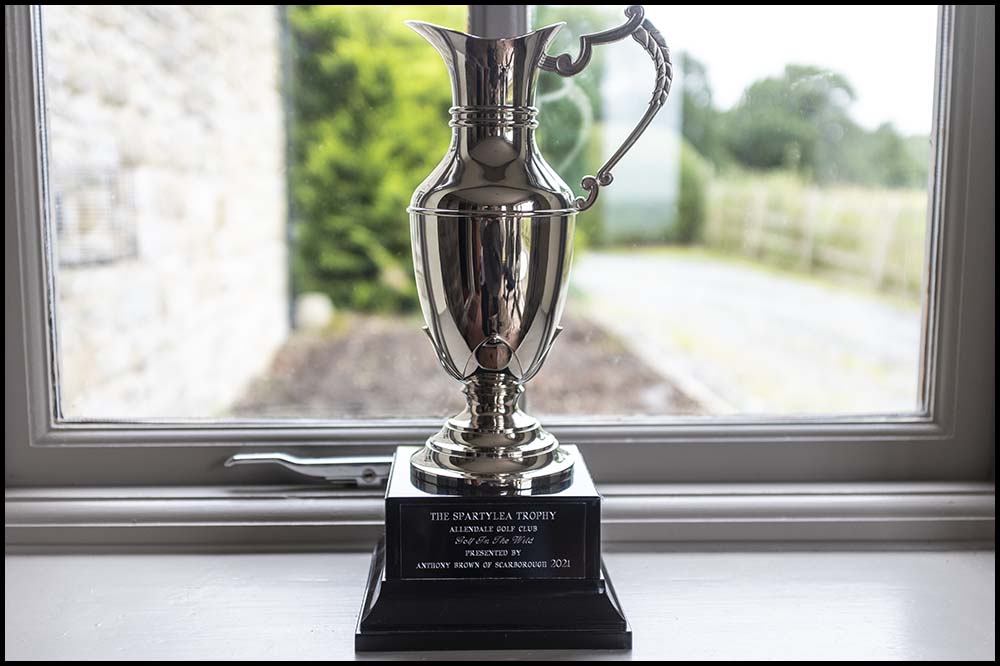 I guess most golfers have an ambition to play St Andrews, the home of golf.  Scheduled to play Anstruther at 13:30 we had some time to spare so we drove the extra ten miles north and spent an enjoyable hour gongoozling at St Andrews’  first tee and the eighteenth green.

Much as I would like to play the Old Course, I have some reservations.  I would feel obliged to use a caddy and I would imagine a continuous analysis of my fragile game by an old hand who has seen it all before, not least the incompetent hack.  There is also the gallery, especially at the eighteenth where a wayward finish is all too publicly on display – and always remember Doug Sanders.

This good man cleared the Valley of Sin but, his ball ran through to the rough at the back of the green and found a testing lie which he wanted the ‘gallery’ to know about.  Despite this he chipped to within feet of the pin – a fine effort in spite of the attentions of the man with a camera. 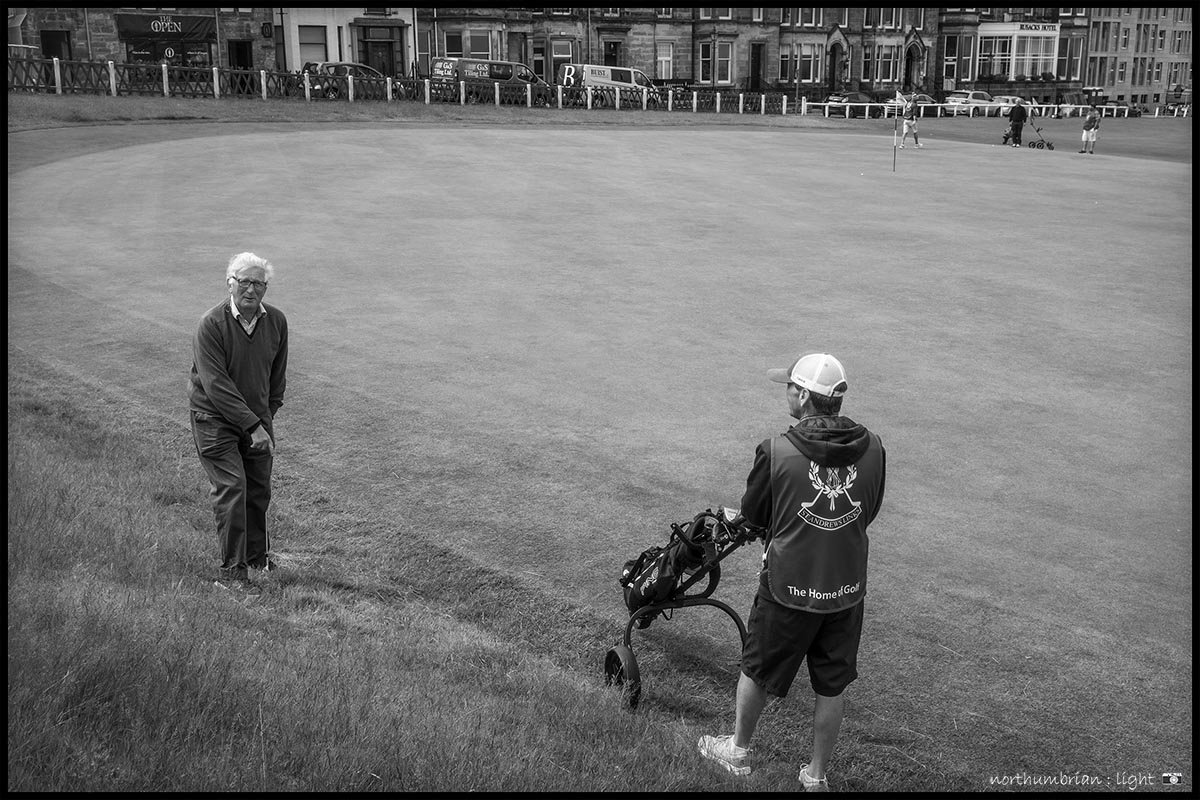 Look at this lie! 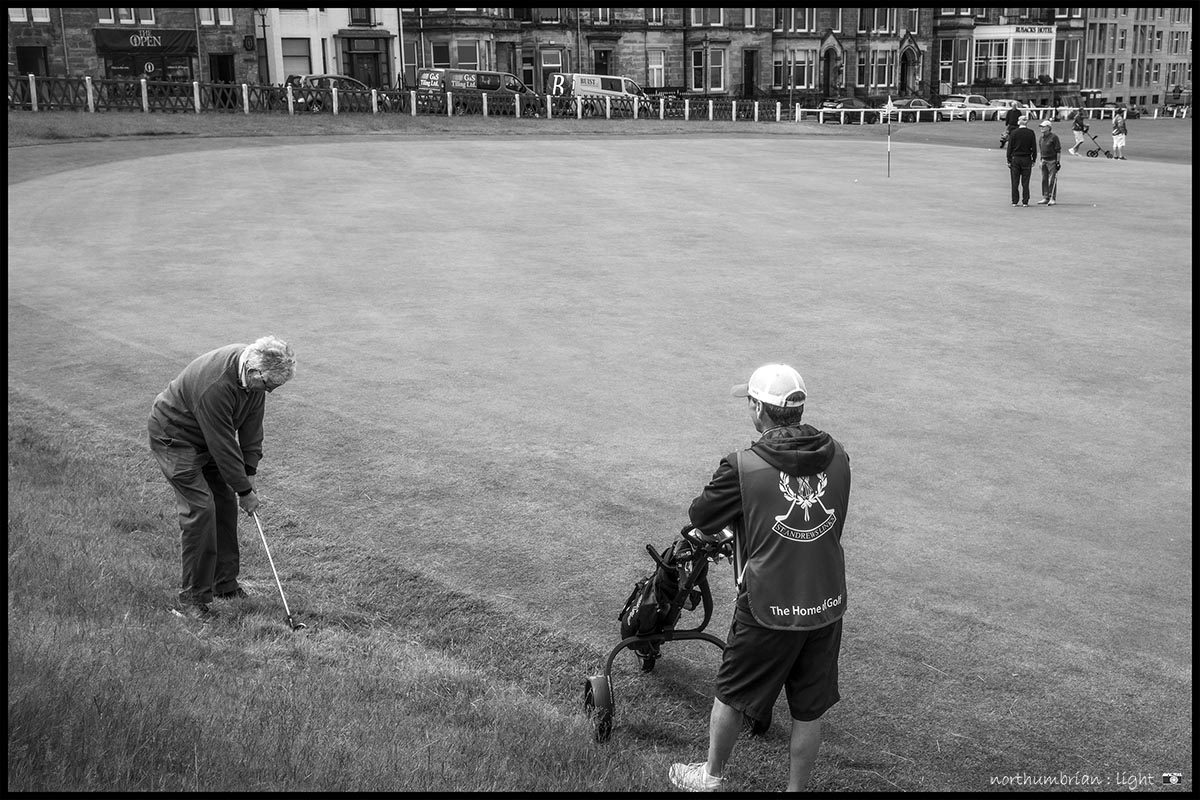 The final drawback is the cost – all well and good if you are in reasonable form but a recipe for certain depression if you are having a poor day.  Nevertheless, I suppose it has its compensations – later that day when I parred the eighteenth at Anstruther, there was nobody present to admire my final putt, just my good buddy who slightly resented me adding salt to his wounds. 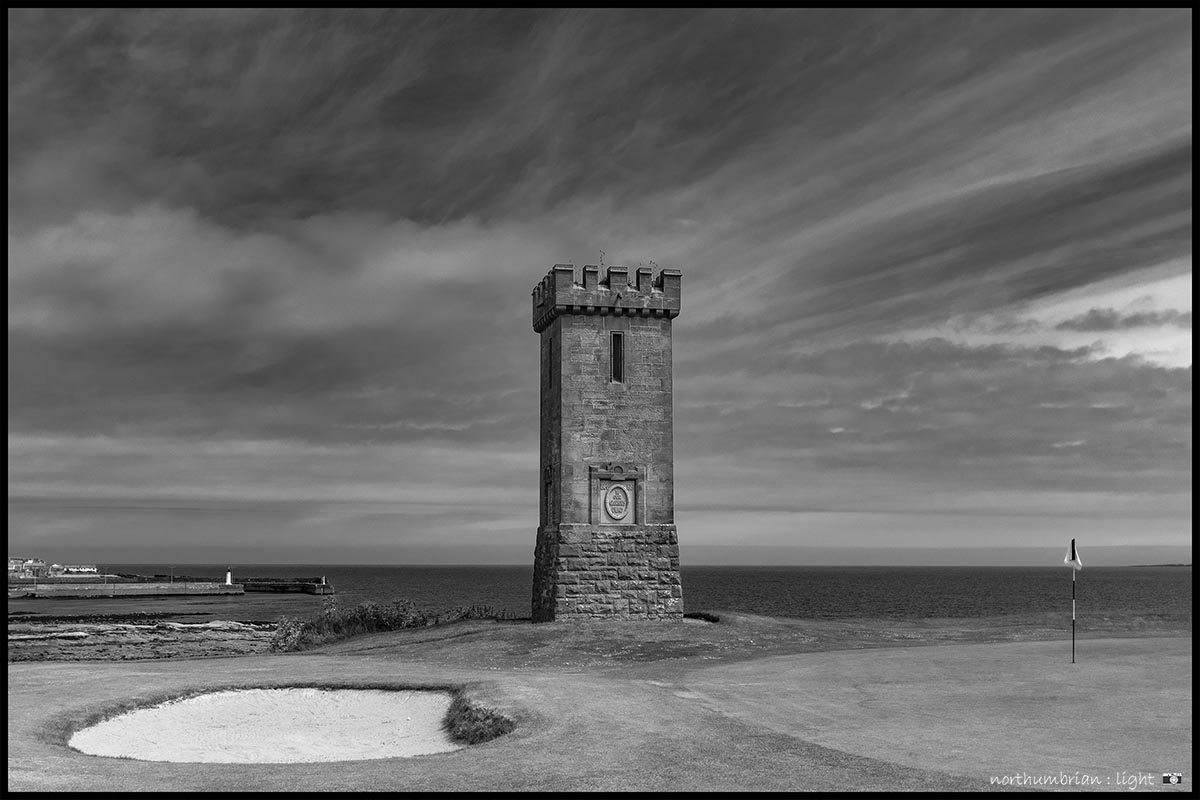 Anstruther proved to be everything I had hoped for – a fine course with some challenging holes, not least, the three consecutive par 3s at the southern end of the course.  The first of these, the fifth – The Rockies, was deemed the toughest par 3 in Britain in 2007 by Today’s Golfer. Ian parred this on the back nine, something I feel obliged to mention 😉 And, yes, but for Covid, Anstruther would have been in the sequel.

Tomorrow we head south again – this time to Jedburgh, a course I have not played since it was extended to eighteen holes. If the sun stays out, it should be a fine finish to an excellent three days of escape. 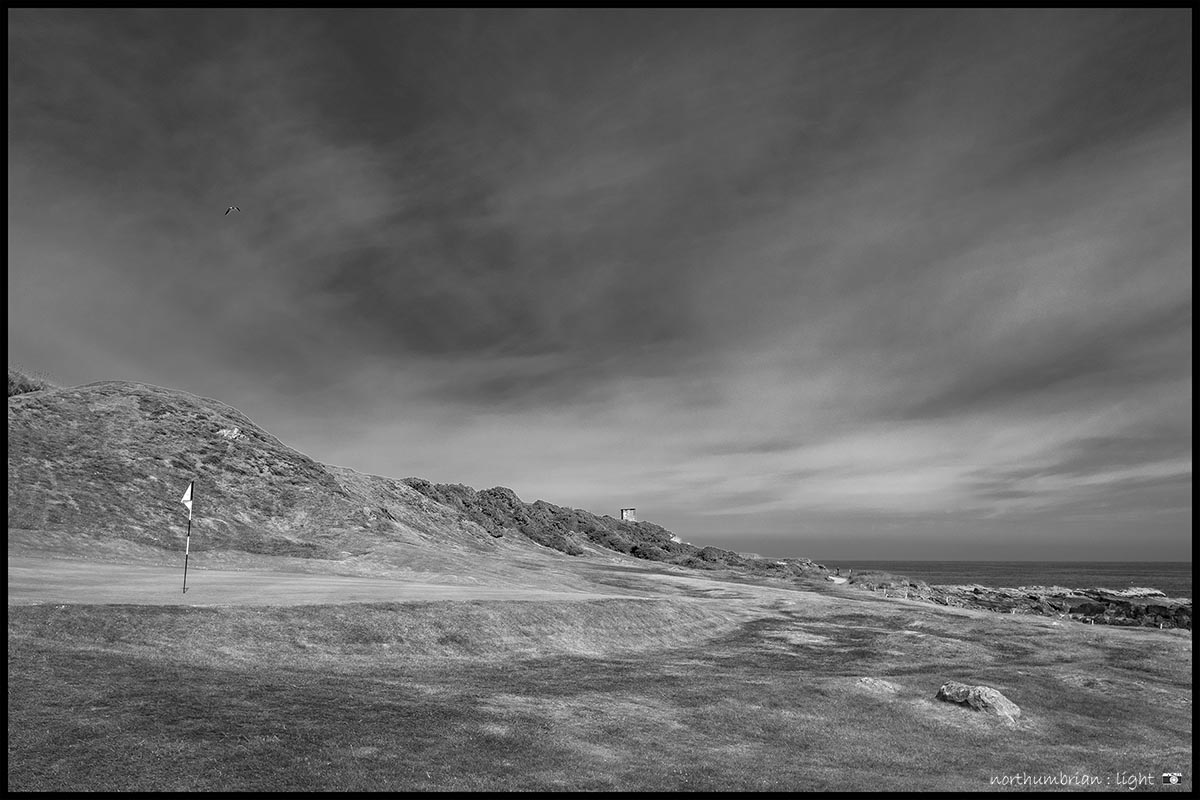 The tee is back beyond the gorse – near the square structure

First golf impressions are influenced by the weather and how well you play.  The skies over Gifford were an unbelievable blue and the scoring surprisingly good.  Consequently I consider Gifford to be a spectacular golf course.  A parkland layout surrounded to the northwest by Blawearie Wood and  in the lee of the Lammermuir Hills, it is well presented with large, immaculate greens.  The Speedy Burn runs across the course and comes into play at the second, seventh, eighth and ninth holes.  The small but tidy clubhouse could feature in George Clarke’s Amazing Spaces.  At not far short of 6000 yards off the yellows with just three par 3s (6000+ off the whites) good distance off the tee will help post a reasonable score.

A nine-hole course, there is some variety on the back nine: the first is a par three whereas the tenth tee is at the edge of the car park – this being some 200-yards distant from the clubhouse where the first tee is positioned; the fourteenth par 3 is significantly shorter and easier than front nine fifth; the eighteenth tee is set back some distance in a small copse and turns the front nine par 4 ninth into a par 5.  The narrow perspective from this last tee presents a challenging finish.

Had Covid not interfered with travel plans in 2020, it is almost certain that this course would have featured in the sequel – Golf in the Wild – Going Home. If asked what has been the greatest influence on writing the sequel, I would have to respond ‘Events, my dear boy, events‘ (H. Macmillan).  As I head for Anstruther with my long time golfing buddy (Ian the L Plates – see book #1), I feel certain the same will apply. 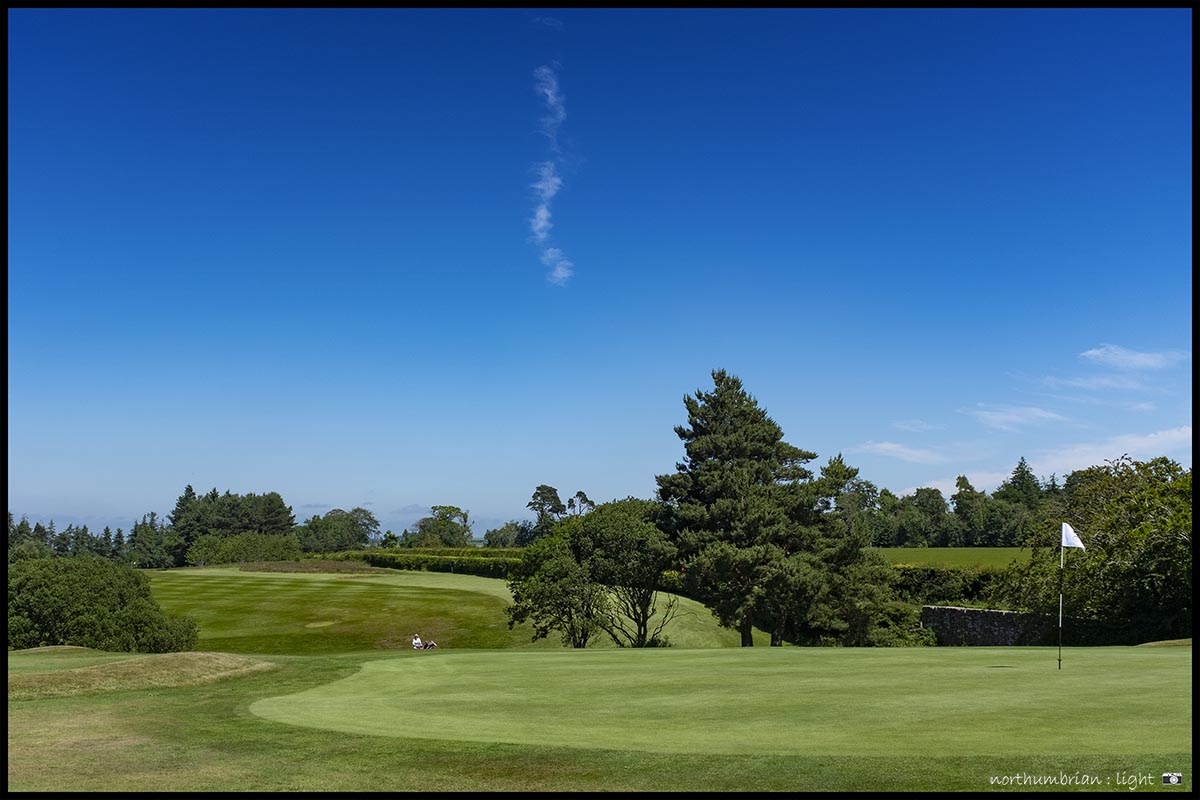 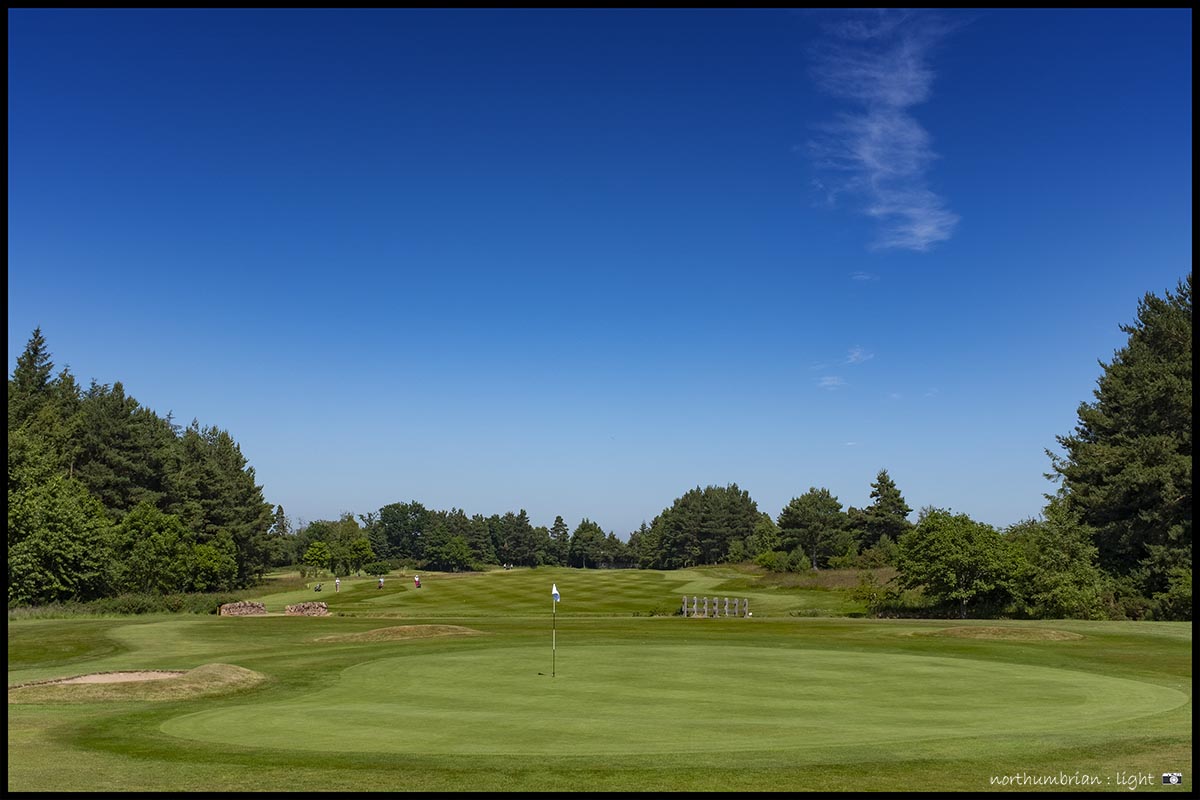 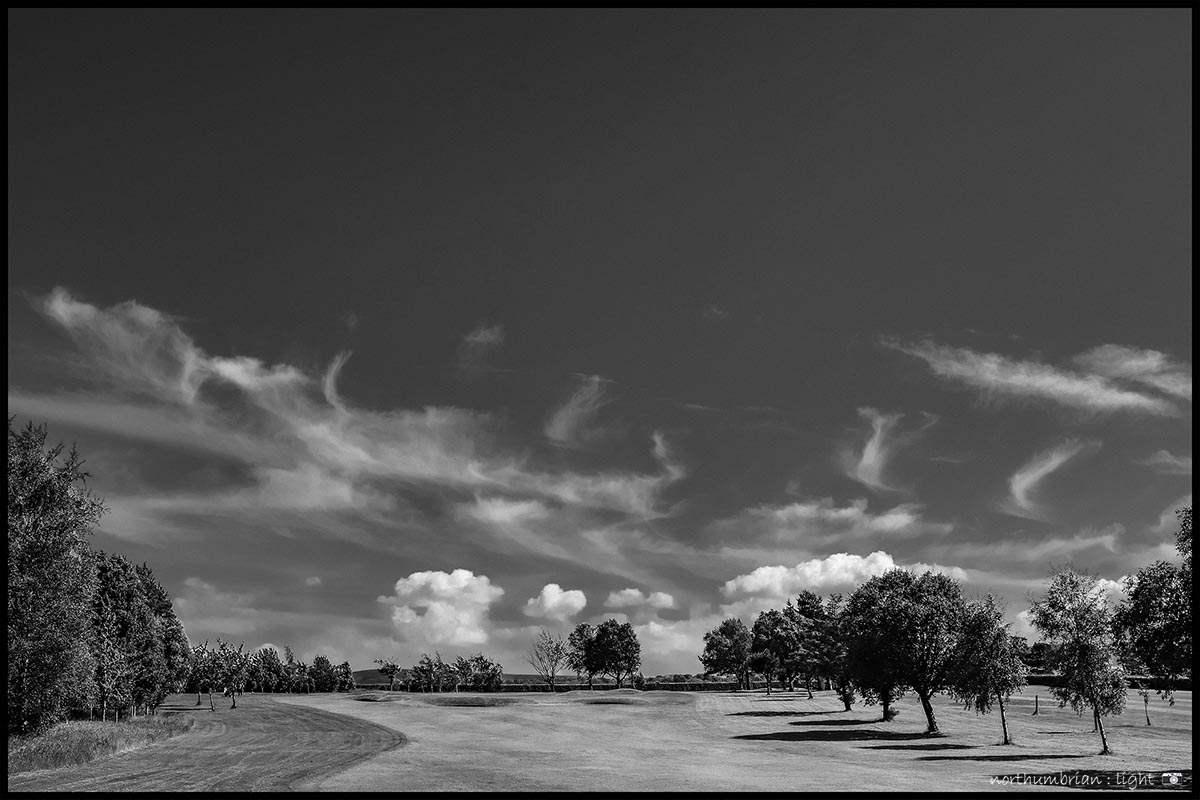 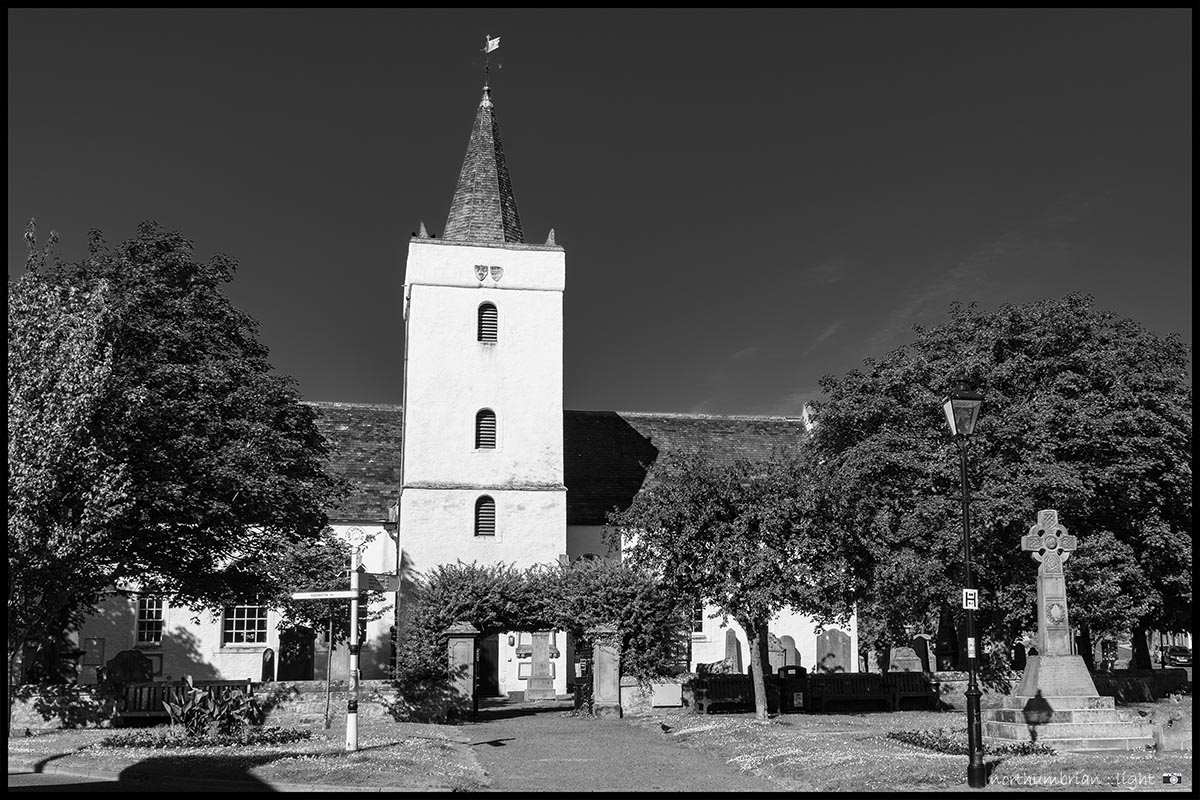 Yester Parish Church in the centre of Gifford

The sequel is progressing – the text is currently undergoing review (by three separate editors!), I have completed the introduction and acknowledgements (my word what a lot of help I have had) and, here is the first draft of the new cover: 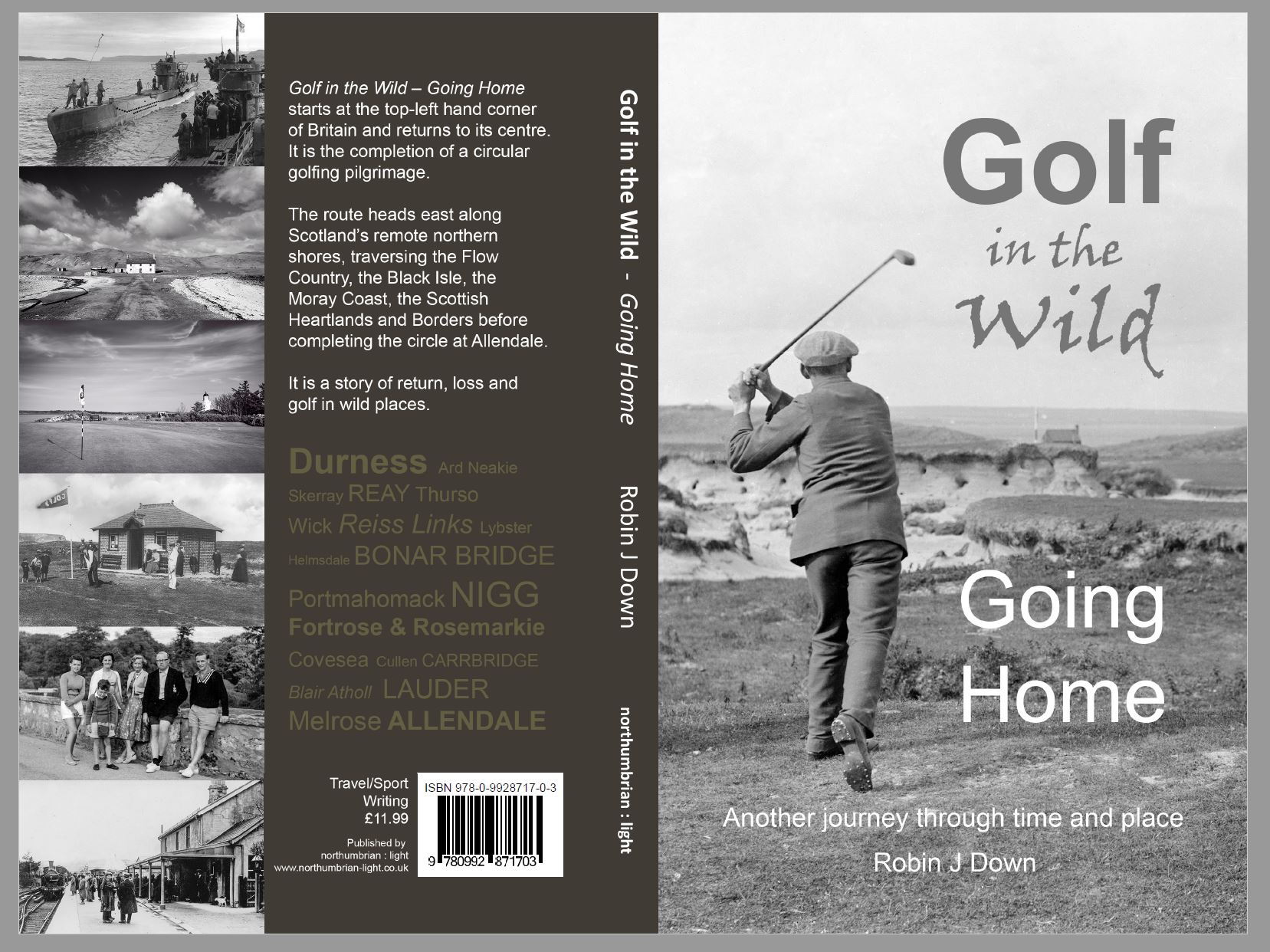 The eagle-eyed might notice a ‘slight’ price increases and the fact that the ISBN is the same as book 1. Some things might change before publication 😉  As an aside – in the 21st Century we are brainwashed by advertising.  I keep seeing the Costa coffee sign on one of the back cover images!

The first print run of 1000 books has nearly sold out and so I have reached a decision point – reprint or make available online.  I have always much preferred print media to e-books and it was this that motivated the high production standards for Golf in the Wild.  It was the unknown book I wanted golfers to find on the shelf at Waterstones which would immediately inspire them to rush to the check-out.  Not that Waterstones was ever persuaded to stock the book but, therein lies another story.

The sequel, Golf in the Wild – Going Home, is due for publication in September 2021.  At the same time I will reprint the first book.  With a gap in availability of several months, this seemed an opportune time to experiment with Kindle.  After several frustrating hours with Kindle Create, I eventually decided to upload as a Print Replica which, in plain English, means that the content appears exactly as it does in the printed book format.  Retention of the original formatting and imagery means it is a large download – more megabytes for your buck.  The Kindle price is £3.49 in the UK, with equivalent pricing in other worldwide territories – Kindle Unlimited members get to read if for free. 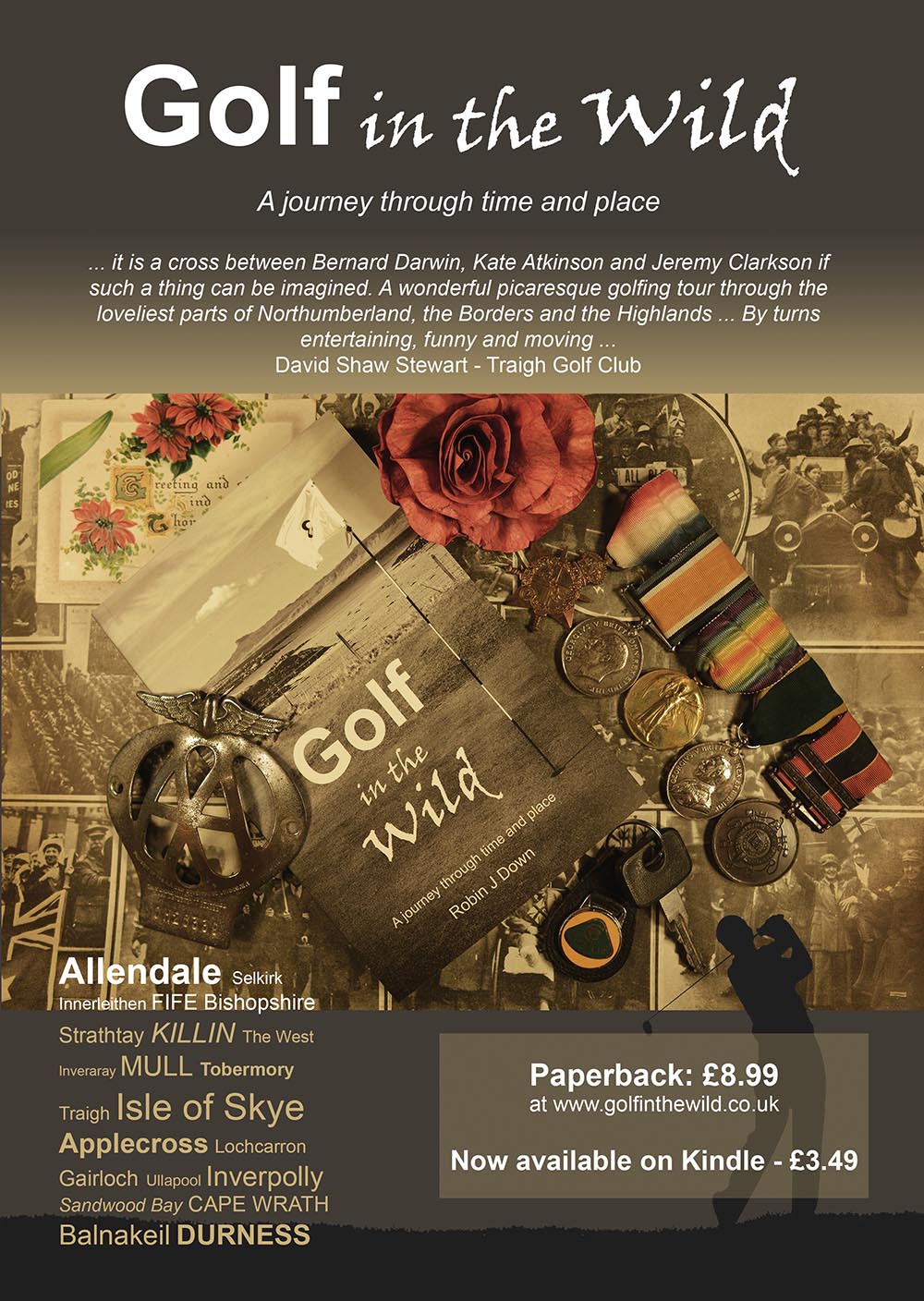